Spring continues to snooze.  Third week of April and finally the snow has begun to recede.  Most of it was lost due to overnight/early morning rain late in the week.

Now the outdoors look like a great sandstorm has blown through.  Gritty streets and sidewalks bear witness to the amount of sand that is used during the winter months.  Soon the street and sidewalk cleaners will be out gathering it all up for reuse next year.

Not much new on the TV front. Still processing the conclusion of Spartacus.  It’s been a while that a show has engaged that emotionally and just been pure entertaining from start to finish.  What a great cast of memorable characters.

Been watching the latest superhero show – Arrow – in big gulps.  The show moves quickly and is not afraid to shake things up.  The cast is uniformly good. 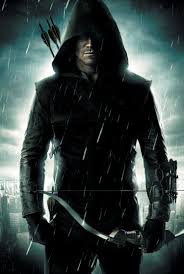 I don’t feel the show has adequately explained Oliver Queen’s modus operandi with him dispatching the bad guys with arrows.  If the focus was kept squarely on the names in his book hit list – after giving the victim of the week a chance first to turn themselves in – it would be more palatable.

The problem is the bulk of his dispatching occurs with the hired hands.  Yeah they are bad guys but Queen never gives these red shirts the same consideration that he gives to the named offenders.  A bit of a conundrum the show just skates around.

The real delight has been in the guest casting the show has pulled off.  Actors such as Seth Gabel from Fringe, Manu Bennett as Craxus from Spartacus, James Callis and Rekha Sharma from Battlestar Galactica, and Ben Browder from Farscape.  None of them get a real chance to develop their characters as its usually a one and done deal. The exception has been Manu who has had a recurring role playing an Australian Secret Service Agent – Slade Wilson in flashbacks from Queen’s time on the island where he was shipwrecked for 5 years.

Been reading self published author Hugh Howey’s Wool which hit a chord with readers where it was available as an e-book in the Amazon store.  From there it has been picked up by a traditional publisher and sold in paperback.  Howey is on the vanguard of a new publishing path that is now possible with the continuing rise of eBooks which bypass traditional methods.

It’s still takes a lot of luck to get a book published and noticed that way and you have to have the skills to back it all up.  So far from the reading I have done of Wool,  Howey has proven himself to be able to let his work speak for himself.  The book is well written, technically and artistically.  It’s a page turner peopled with engaging characters all taking part in a bigger story that has interesting twists.  Some characters, especially the bad guys, are a little two dimensional but there have been traditionally published books with far worse examples.

Wool is an enjoyable and entertaining read which I highly recommend if you like dystopian/mystery/thriller types of stories.

Went to my second meeting of the Edmonton Writer’s Group and have been enjoying myself.  It is very interesting to listen to other people’s feedback from the same story.  Opinions vary widely and I am constantly amazed at the differing reactions to story points that I either had no problem with or even considered.

It’s also evident that there is a great support structure here as the group keeps each other apprised of upcoming writer/book events.  It is also been helpful from a motivational perspective too.  Glad I checked it and I will continue to attend.  One more meeting and I will be considered a full time member.

Does that mean I earn my first letter?

On Tuesday, April 3rd I went to Audrey’s Book Store in downtown Edmonton to see SF Writer – Robert J. Sawyer do a reading from his new book – Red Planet Blues – a mystery noir set on Mars.  I haven’t been able to attend on of Rob’s readings since we moved out west so it was a real treat to see and hear him again.
We chatted for a few moments – he actually remembered who I was! – and compared notes as to what we had been up to lately.  His reading was excellent.  Quite funny in fact.  Rob joked around that he had learned that the best way to entice readers was to make sure his reading selection included nudity and action.  I thought he was just kibitzing with the audience but Rob was telling the truth. His reading contained both and a lot of humor too.
There was a question period afterwards which was interesting. His nex project is based on, ‘The Psychomatic Zombie.’  Sounds like Rob is trying to tap into the serial killer/zombie craze.  Fascinating stuff.
I have his latest book on my To Be Read pile.
~~~

So we went west for Easter Weekend and stayed at an inn in Lake Louise.  The trip was gorgeous and the roads were practically deserted.  The first shot below is typical of the both scenery and traffic.

If you scroll back to my previous post you can see what Lake Louise looks like in the summer.  This is what it looks like in the winter.  Truly gorgeous.
We ate very well – too well for me, I felt like the 10 pounds I have lost since the start of the year all came back that weekend.
A splendid time was had by all and we plan to visit Jasper in the summer.
~~~
Off to my first writer’s group meeting with the Edmonton Writing Group tonight.  They meet twice a month and do group reviews of each other’s writing.  Looking forward to hanging out with some other writers and sharing thoughts and feedback.

So having moved out west to Alberta in 2012, one of the allures was being able to head to the hills for quick vacations.  Big hills ie The Rockies.

Last year we made it to Banff and this weekend we are heading to Lake Louise.  Pictures of it look gorgeous such as:

Seeing it in person should be a stunning experience.

Another trip we plan to do this year is to go to Jasper and see the glacier field.

~~~
In the near two years we have moved from Ontario to Alberta things have been going very well.  Our son’s school marks have improved drastically as has his attitude about school.  We are ecstatic on that front.  On the home front, we are mortgage free and very happy with our living space.  Finally, on the job front since moving out here, my wages have increased by almost a quarter. Very nice. Even better, the work is interesting and my work team is composed of a great bunch of guys to work.  The clients are also an excellent bunch.
It’s been win, win, all around.
~~~
Things are on the writing front are pretty well stalled.  The mantra is to write everyday but without a mapped out story, I find such advice impractical.  It’s not for a lack of ideas but for me the stumbling block is creating interesting characters to dramatize those ideas.  And that process always takes time for me.
RedShirts by John Scalzi

It niftily skewers the model of TV writing that grew out of shows of the original Star Trek and it’s ilk. TV writing often operates under the dictum of, ‘Don’t need it good, need it Tuesday.’

Definitely a fun read but my biggest laugh was Scalzi’s afterword where he boasts that Stargate:Universe, which he worked in, was a better written show than the Star Treks. S:U may have given its Redshirts more meaningful deaths but it had so many other writing problems.

Clever of Scalzi to take an oft discussed TV trope and turn it into a novel.

Ewan McGregor, Ian MacShane, Stanley Tucci, Bill Nighy, and Bryan Singer.  When you write it down, such a list of talent leads you to believe that this will be a project of some import.  But, alas Jack The Giant Slayer is an instantly forgettable 3D effort that retells Jack and The Beanstalk.  It’s rather amazing that a well acted and polished effort can lack any sort of emotional spark.  Goes to prove that story telling is an art and not a science.

To date, I’ve written a mirco-piece of 200 words and a flash fiction piece of 1000 words. Time to tackle a more traditional length of prose.