So having moved out west to Alberta in 2012, one of the allures was being able to head to the hills for quick vacations.  Big hills ie The Rockies.

Last year we made it to Banff and this weekend we are heading to Lake Louise.  Pictures of it look gorgeous such as:

Seeing it in person should be a stunning experience.

Another trip we plan to do this year is to go to Jasper and see the glacier field.

~~~
In the near two years we have moved from Ontario to Alberta things have been going very well.  Our son’s school marks have improved drastically as has his attitude about school.  We are ecstatic on that front.  On the home front, we are mortgage free and very happy with our living space.  Finally, on the job front since moving out here, my wages have increased by almost a quarter. Very nice. Even better, the work is interesting and my work team is composed of a great bunch of guys to work.  The clients are also an excellent bunch.
It’s been win, win, all around.
~~~
Things are on the writing front are pretty well stalled.  The mantra is to write everyday but without a mapped out story, I find such advice impractical.  It’s not for a lack of ideas but for me the stumbling block is creating interesting characters to dramatize those ideas.  And that process always takes time for me.

Wow!  Is this the Tiberius that James T. Kirk was named after? What a despicable little shit he is!

Crassus asking why Caesar was not a horse was priceless. 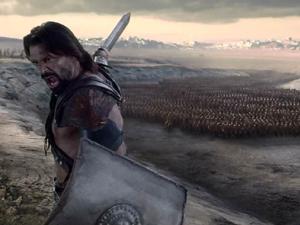 Brilliant and bloody battle scenes.  In the picture above we see Crixus, who has broken off from Spartacus, exulting his cohorts to defeat the Roman force below before heading to Rome itself.  Which can be seen on the horizon.

Alas it is his last victory for a fatal battle looms right after this one.

8 episodes in.  Only 2 left.  Characters are starting to fall now.  Two(?) of the bigger ones were taken down.  Time runs out for the remainder.

Many out there review King’s works and Bev’s voice is one of the most clear and perceptive.  I really enjoyed reading his takes on King’s works since 2000 and on.  Bev’s insights, at the least, crystallize concepts and themes King tackles; while often providing food for thought and new ways to view King’s writing.

I treated this book like candy, reading one review a day and was really sad when I reached the end.

Congrats to Bev on a job well done and another welcome addition to my King library.

It niftily skewers the model of TV writing that grew out of shows of the original Star Trek and it’s ilk. TV writing often operates under the dictum of, ‘Don’t need it good, need it Tuesday.’

Definitely a fun read but my biggest laugh was Scalzi’s afterword where he boasts that Stargate:Universe, which he worked in, was a better written show than the Star Treks. S:U may have given its Redshirts more meaningful deaths but it had so many other writing problems.

Clever of Scalzi to take an oft discussed TV trope and turn it into a novel.

Ewan McGregor, Ian MacShane, Stanley Tucci, Bill Nighy, and Bryan Singer.  When you write it down, such a list of talent leads you to believe that this will be a project of some import.  But, alas Jack The Giant Slayer is an instantly forgettable 3D effort that retells Jack and The Beanstalk.  It’s rather amazing that a well acted and polished effort can lack any sort of emotional spark.  Goes to prove that story telling is an art and not a science.

To date, I’ve written a mirco-piece of 200 words and a flash fiction piece of 1000 words. Time to tackle a more traditional length of prose.

Our trip to Lake Louise this weekend got pushed back to the next one.  Last Sunday, after three days of constant snowing our patio view ended up like the first picture below.  During the rest of the week the weather improved and the roads looked fine for our upcoming 5 hour trip.

Then yesterday the heavens let loose again and a forecasted dump of 5 cms. ended up a much more substantial 20 cms.  As you can see in the second picture.
They say a picture is worth a thousand words, well there are guaranteed more than a couple of thousand here.  Not to mention the few thousand expletives I could add.
Fortunately the hotel we are staying at let us switch our reservations to next weekend.  With the end of March nigh, surely winter has to take and break and/or leave!
Doesn’t it?
Stay tuned….
Finished the 7th book in the Dresden series – Dead Beat.  Seeds laid in the previous book come to the forefront right away in this book.

The mystery of the sigil burned into the palm of Dresden’s burned hand is craftily revealed and with it comes the promise of greater power in a time when Harry needs it the most badly.  Halloween Eve is coming and with it the bad guys – this time necromancers – are up to evil on such a scale that war on the Wizard Council is but part of a feint for a more devious plan.

Balanced against all of this and the lure of greater power is the certainty that if Harry goes down that path he will lose himself to fallen angel Lasciel.  She is also known as the Seducer, the Webweaver and the Temptress.

Harry’s little dog is not so little anymore and guards his master well.  A new character, Butters – a timid one man polka playing band – is a techie that ends up becoming much more of a fighter than even Harry thought he could be.

Handled far more slowly and carefully is the relationship between Harry and Murphy.  She takes off with the mercenary Kincaid from the last book; reading between the lines in an attempt to get some form of reaction out of Harry.  Even though she is absent from most of the book, all of Harry’s actions are predicated on protecting Murphy.  During the course of the story Harry is forced by his half-brother to confront his feelings about Murphy even though nothing is resolved when the two of them meet at the end of the book.

But I can’t wait to see Murphy’s reaction when she finds out she was the reason Dresden took all the risks he did in this story.  If she does find out that is.  My money is on her finding out.

Really enjoying the character arc and growth for Harry.  His power has grown substantially from the first book and so too have the choices Harry has to make.  And the price he has to pay.

This Friday we are heading to Lake Louise out in the Rockies for the weekend.  It’s a four hour drive from home and I was hoping by the end of March that the worst of winter was behind us.  But it’s been the second coming of winter with snow falling on consecutive days and more in the forecast.

This could be an interesting trip.