It’s been over a week since my last blog entry and the time gap is due to how busy I have been keeping.  Finished reading Owen King’s wonderful novel – Double Feature, saw the last two episodes of Spartacus – wonderful end to an emotionally engaging series, and have been nursing a sore back back to health.  The back injury was perplexing – was out walking the dog, felt something shift in my spine which caused the muscles in my lower back to seize up and then leave me with intermittent spasms over the rest of the week.  Each day the muscles relaxed more.  It has taken over a week for the spasms to cease.

It’s looking like Mother Nature didn’t make the mailing list for this year’s calendar. Mid-April  and we are still getting snow. Not just here but all over the country. Climate change is a much more apropos term than the more popular global warming tag bandied about these days.  Anyhow, time for a bit deeper dive into…

~~~
Double Feature is a true delight! Congrats to Owen King. I am left with the conclusion that he is a man wiser than his years. 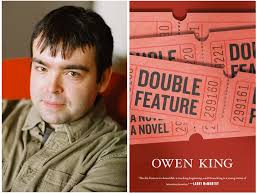 DF is a book filled with great characters, great life insights. It covers the spectrum of emotions and several set pieces that made me laugh outright at several passages.  There are some great ruminations on the nature of life as well.
What more can one ask for in a book?
Did anyone figure out who Bea’s boyfriend is?  I inclined to think it’s – GASP! – Tom.
~~~

To die a free man is a noble thing.

Spartacus: War Of The Damned – Series Finale – Victory
To all involved with Spartacus I only have one word – GRATITUDE!

A tip of the hat to the creative team behind this series – Steven DeKnight ignored the naysayers and took this bloody, bawdy, no holds barred approach to the series – including same sex partnerships; all done in an operatic style that conveyed the immediacy of those times in contrast to the largely sheltered life most of us live today to dramatize the cost and pursuit of freedom.  This was done on the macro scale thematically throughout the series and in parallel the character arcs of the major players mirrored that struggle.  Spartacus, whose real name is lost, the Roman name given to a Thracian slave became more than a name.  The name became legend and a symbol for freedom.   At the start of the rebellion Spartacus driven by revenge for the death of his wife at Roman whim. At the end he had grown beyond his own concerns and forfeited his life so that the woman, children, and the less fortunate unable to protect themselves could find freedom.  In this way he honored his wife’s memory.

Contrast that with Gannicus, a fellow gladiator who had won his freedom as a slave and had reluctantly joined the rebellion out of guilt at having slept with his comrade’s – Oenomaus wife.  While he pledged his sword to the cause, he kept a distance too, constantly refusing Spartacus’s entreaties to accept a leadership role until the very end when he became touched by the plights of the lessor.  He and Spartacus ended up at the same place but by widely divergent paths.

The finale played with expectations by constantly providing moments of hope where even though the outcome is known in history books.  So when Spartacus finally fell after several close battles with Crassus and Gannicus had the expected return engagement rematch with Caesar; gaining the upper hand only to be thwarted in delivering the killing blow when overcome by other Roman soldiers,  their outcomes were more difficult to take while feeling even more worthy because of those tantalizing moments of possible victory.  Gannicus being crucified and seeing Oenomaus and the cheering crowds of the arena once more were a fitting end for him.  Just as Spartacus lay dying waiting to see his wife once again.  And to hear her speak his real name.

It was a thematically interesting approach for the show to take where the major characters were often defeated by unseen attacks from the back.  Crixus, Spartacus, Tiberius, and much later, and more famously – Julius Caesar.  The irony of Caesar’s derivise jibe to Gannicus after he has been hoisted up on the cross – ‘Such an ignoble ending.’ – is replete with irony.
What a great end to an outstanding series.  A series that was criminally under watched.  The nod to the original Spartacus – Andy Whitfield – at the end was well done too.
I shed a few tears as this one played out.  This series entertained with the best of them.