There are many things our family loves about living out in Western Canada – the open spaces, the mountains etc but the weather can be a bit trying at times.  The last week of April saw spring like conditions finally arise only to have it all undone by snow the last two days.  It is very deflating to wake up to see snow falling at this time of the year.

Hannibal  – really enjoying this atmospheric and intelligent take on Thomas Harris‘s characters.  Especially the show’s serialization of story – not killers! – carrying the impact of Graham’s shooting of serial killer Hobbes in the third episode.  The show has done a great job of avoiding the case of the week syndrome that the CSI clones do.

The sub-textual handling of Bella Crawford’s – so nice to see Gina Torres again –  cancer and Graham’s  realization of it during the questioning of a suspect was wonderfully played. Both actors gave very controlled but amazingly poignant portrayals.  Highlight of the episode. 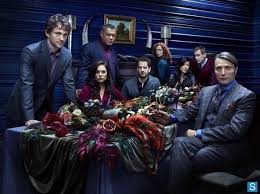 And a wonderful example that what is NOT being said or is only being intimated, can be just as powerful, even not more so, that what is being shown or told.

Prophet of Bones by Ted Kosmatka  – literally a real page turner.  I knocked off over a 100 pages in my first sitting.  This is a Michael Crichtonesque style thriller.  The prose is lean and clean – complex emotional beats and ideas reduced to tight single lines of writing.  It all revolves around a unique find of ancient human bones and the book is filled with much scientific jargon around genetics but never becomes dull or boring.  The book dwells in the same conspiracy theater that books such as The DaVinci Code do.

The interesting thing about the author is that he works as a writer for the videogame company Valve – maker of the classic Half Life series and Portal games.  He writes the same brisk pace and economy of words employed with video games.  Not my normal cup of tea but I enjoyed.

The major caveat with the book – as with most books of this type or TV shows – Hello Lost & X-Files – the buildup surpasses the payoff.