First time Chuck writer Nicholas Wootton sets up a Chuck episode that aims high but is undercut by execution factors outside his control and the restrictions of the world which the show has set upon itself. He has a solid grasp on the spy material but the world of BuyMore retail ridiculousness was flat.

The spy storyline of a prisoner transfer of characters from Chuck and Sarah’s past is a great idea but is hampered by the need to tie a BuyMore storyline to it. The Cubic Z gives some excellent emotional hooks for Sarah into the main storyline only to have them undercut by placing the burden of carrying those moments on Nicole Ritchie. The episode gives a triumphant return to Big Mike but at the expense of Morgan’s character.

For Sarah, the reappearance of high school nemesis, Heather Chandler, could not come at a worse time. Having a romantic getaway canceled in the midst of relationship strain over commitment issues places Sarah in a vulnerable position. And like the true predator she is, Heather Chandler senses Sarah’s weakness and exploits for pure enjoyment. It is this aspect of the Heather character which works so well and which Nicole Ritchie can carry off with relish.

The return of Steve Austin’s Hugo Panzer clicked on all fronts. He was big, bad, crafty, powerful and engagingly evil. Everything you want in a bad guy. Hugo was plain fun to watch and his fight scenes with Chuck were great, especially the Cage Match. His eventual put down by Big Mike was good – though the Big Mike put down of Leader from Season Two is still Big Mike’s signature take out in my books. 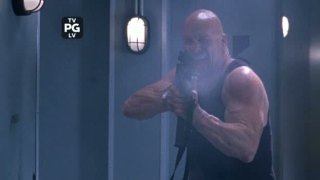 The best character interchanges took place between Sarah and Casey this episode. Who would have thought that the two spies of the show would not only be having personal conversations but good ones at that two seasons ago? Sarah’s pit bull aggression while fighting Casey was hilarious. Chuck, Intersect or no, do not make this female dynamo angry!

For the first time this season, an episode hit the ground running. The pacing of the episode was good even when certain elements were not working such as the whole BuyMore Spy Attack video game launch and the return of Big Mike. I love Big Mike as much as the next person and it was great to see him again. Unfortunately his return was at the expense of Morgan’s character and to an extent Chuck’s. Chuck should have taken down Hugo in the cage. And no way, would Hugo leave the cage without killing Chuck.

Also does this mean the end of Beckman’s onsite presence? If so, that is a most unwelcome reversion.

It was also a welcome sight to actually have Sarah’s conflict over learning that she was no longer the person Heather claimed, to be visibly dramatized. This was done through Heather’s character as well as during the decisive moment on the rooftop battle when Sarah frees Heather to help in the fight instead of giving her up. Unfortunate then that Heather’s last speech to Sarah about Chuck and love and Sarah being able to change came out as an exposition infodump instead of a heartfelt moment.

To balance that though the episode had several terrific action scenes. The brief but violent fight between Greta and Hugo made an impact. Along with the rooftop fight, Chuck’s cage match with Hugo, and Sarah’s feel good putdown of Heather the episode earns top marks on the action front.

Another thing the episode did well was to show that Volkoff has far reaching power. To be able to arrange prisoner transfers and intercept and replace rescue teams keeps his presence in our minds. It also shows he holds a grudge. Heather’s reveal about Operation Beacon and that Frost was never far from Volkoff’s side continues to muddy the waters as to where MamaB’s loyalties lie.

While the closing cliffhanger was not all that much, I did like the notion that even though Chuck and Sarah have agreed to take things slow, the timing of an engagement ring showing up at that very instance plants the seed of thought that Fate may have something else in mind for them as far as a timeline is involved.